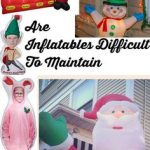 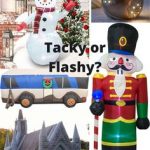 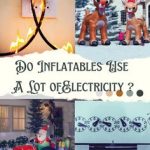 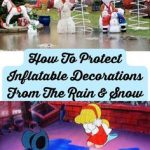 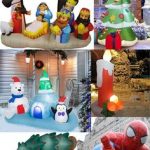 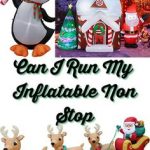 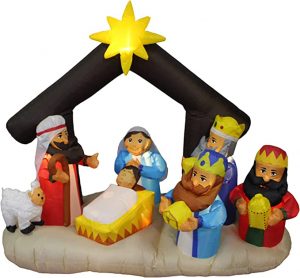 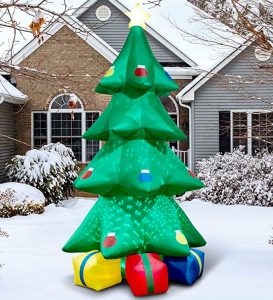 Arguably, the easiest way for a holiday display enthusiast, who does not have a lot of time, to make their display pop are Christmas inflatable decorations. However, be warned, the faster and easier it is to make a big bang with your display, the more you will have to pay upfront and so a quality, large inflatable may not be for those who do not have much money to put towards their display. In this article I’ll be giving some of the basic frequently asked questions about inflatables as a bit of an introduction with followup on practical elements related to inflatables here.

Where did “Airblowns” come from? 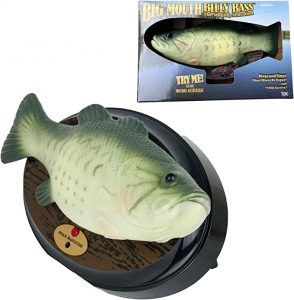 Just before Christmas of 1998, Gemmy industries invented the infamous Big Mouth Billy Bass, which was an animated, singing fish on a plaque. Wanting to continue making amusing innovative decorations for the masses, Gemmy later set on making the massive industrial inflatable decorations seen at Macy’s Thanksgiving Day Parade and car dealerships into a household form. Three years after the singing fish’s debut, the first airblown decoration debuted as a Santa with a glorified hair dryer attached to keep him inflated.

What are Christmas inflatable decorations made of?

While these original inflatables were made of polyester, the issues with the material being heavy to inflate lead to nylon with a waterproof PVC coating becoming the default fabric for inflatables, and obviously the fans have come a long way in how strong and lasting they are. It took quite a while to catch on but by 2006, airblowns, aka inflatables, were extremely common and well on their way to being just another weapon in the holiday display decorators’ arsenal. They are so common now that those younger than thirty probably do not remember a time when inflatables were not being used on lawn displays.
Note: in the rest of my website, you will see the term inflatables being used more commonly as I find it to be a more universally understood term but, out of respect to Gemmy, I will highlight that they are the inventors, and they call them airblowns. 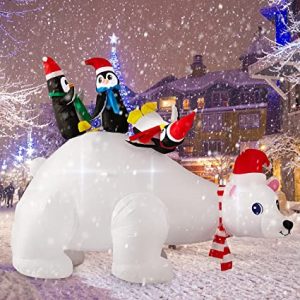 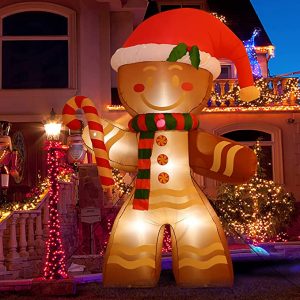 While some may see inflatables as a natural part of Christmas and other holidays, there is a definite underlying controversy that is not commonly spoken of. Older traditionalists consider Christmas inflatable decorations to be tacky as so much of holiday decorating is based on traditions and a new decoration of this type can anger those who want to protect the precious nostalgia of the season. Furthermore, some of the tradition in the season is the fine but hard work that is put into cooking, putting lights on the roof, lugging a tree in and climbing up to decorate it, and inflatables are seen as being the lazy persons way to decorate.  Finally, the manufacturers recommend not keeping inflatables on continuously and so, when they are deflated, they resemble dirty laundry on the floor.

A counter argument to the concern around the look of deflated decorations is that in colder, drabber weather, things are unattractive during the day, and this does not really make it worse. Decorating in warmer climates and times of year for other holidays may require a second thought as a bright day with a lush lawn could be tarnished by these decorations so it is something to keep in mind if you are decorating in those conditions. Those who want to have a massive effect but do not have the time to set up more elaborate and time-consuming decorations, those who do not have the room to store more solid decorations, and those who just plain like the look of certain inflatables (like myself) feel differently and think inflatables do have a place in displays.

So ultimately yard inflatables are tacky if you are more rooted in pre-21st century traditions, have a strong emphasis on the hard work that it takes for each aspect of the season, and you find the look of deflated decorations during the day intolerable. However, you may not find yard inflatables tacky if you like the crisp look of a brightly lit up contemporary decoration and find the anticipation of waiting for them to reinflate in the evening exciting. Note: a strong suggestion is that you inflate when it’s calling for rain/snow even thought the manufacturers say not to as the inflatables will easily become buried and unable to inflate for the rest of the season until the rain/snow evaporates or you spend a lot of time uncovering it.

How long do inflatables last? 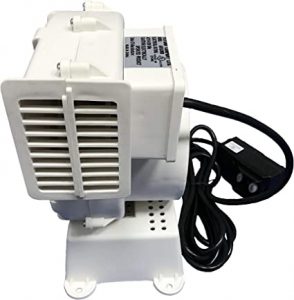 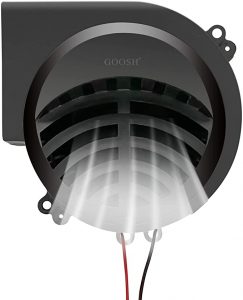 Ultimately, inflatables last up to ten years if you want to put the work into maintaining and repairing them. The lights and fan can be replaced on most of the better made ones with minimal work, perhaps two to three minutes if you get practiced and organized on how to do it. Accidental tears in your Christmas inflatable decorations can be patched with packing tape (or any other large clear tape you may find) for small issues or sewing with simple thread for larger rips. However, the sun is unforgiving and, even if it is cold, the UV rays will eat through the fabric and wear it so thin that your fan will be unable to keep up with the air loss, at which point it is time to retire the inflatable.

How to Replace a Fan On Christmas Inflatable Decorations

To replace the fan in an inflatable, you simply need to (1) unzip the flap near the fan, (2) cut the zip tie holding the fan in place, (3) follow the line coming from the fan to the lights and then undo the simple knot that is in place to hold the light, (4) pull the whole thing out, (5) place the new fan in, ensuring the new light string is inside the inflatable, not between the fan and the fabric, (6) re-zip tie the fan in place, ensuring that a little bit of fabric is held onto the fan on all sides to seal the air in, (7) re-tie the light string inside the inflatable at the same location, and that is it. I will be uploading a video to TikTok soon on how to do this process.

To specifically replace the lights in your inflatable, they are either mini lights or C7s, depending on the size of the inflatable, which can easily be picked up in most places that sell Christmas lights but to make your Christmas inflatables brighter, you can watch this guys video

Can I leave inflatable decorations on all the time?

The short answer is, you can do whatever you want but there could be consequences. Manufacturers generally recommend no more than eight hours of continuous use at a time but, depending on your desired effect, you may want to have them on longer. The chief risks of leaving them on longer than recommended are that you may burn out the fan and/or decrease the lifespan of the equipment.
Aesthetically, arguments could be made that leaving inflatables on all the time will make them not feel as special, but it could also be that avoiding the deflated piles on your lawn helps counter the disdain of those who find inflatables tacky. Personally, I like to see my inflatables rise as the sun sets, except that I keep them on when it is snowing out for both the effect of seeing them light up the storm, and to protect them from being submerged under a snowbank.

How do you protect inflatables from rain?

Inflatables, especially after all these years of fine tuning, are very much made to be out in rain and snow and do not need a lot of special protection. You will need to make sure not to place them in areas where rain will pool and submerge the fan in water. Furthermore, smaller Christmas inflatable decorations generally have a fan on the back which is more open to the elements versus the larger inflatables whose fans are underneath and protected from snow. The positioning of the fan should be a consideration regarding your choice of purchase, where to place them, and when to possibly leave them uninflated for their own protection.

How many watts are inflatable decorations? Do inflatables use a lot of electricity?

To answer this question would require a bit of homework for each individual decorations’ motor strength, what your local power rates are, how many hours a day, and total days of usage for the decoration, etc. so, I am going to speak more in generalities. Electricityrates.com uses an average 220-watt motor as a case study and says those decorations consume 72kwh during the season which, according to whatever power rates and time used that they compute, equals $8.64 for the season. I have found two other sources of information from ‘yard inflatable life’ and National Grid but unfortunately both sets of info are archived and just showing up in the description of searches, with the links then being broken. HOWEVER, the research I was able to gleam is that a twelve-foot Christmas inflatable decoration usually uses eighty-five watts per hour and, if used twelve hours per day, would equal 1.02 kwh per day. Local energy rates here in Nova Scotia are, at the time of writing, sixteen cents per kwh which means almost $1.96 per day.
If planning out the electrical consumption is important for you, the fact that electrical consumption does not increase proportional to the size is probably a key point. To use specifics on this, a four-foot inflatable should use 1.248kwh/day, an eight-foot inflatable should use 1.82kwh/day, and a twelve-foot inflatable should use 2.04kwh/day, To make math clearer, an eight-foot is twice the size of the four-foot but takes less than 50% more power. Likewise the twelve-foot is 50% bigger than the eight-foot but only takes around 10% more. Factors to keep in mind: heights listed here are assuming your 4-foot-tall inflatable isn’t 10 feet long. Assume it’s only a few feet wide, as extra width would add a much bigger fan, possibly a second altogether. Furthermore, twenty feet, and bigger, inflatables also seem to grow at a faster rate than the smaller ones. Some twenty-foot ones taking almost 400% of the electricity of an eight-foot while only being 250% of the size.

Do inflatables have to stay plugged in?

If you want it inflated, then yes. They’ll stay inflated for a moment but only a moment and then will be the pile I spoke of above. They’re only recommended to be on 8 hours/day, but I’ve left mine on for days with no immediate effects. The best effects are when it’s dark so nighttime is best for them, but storms can make them look great. As I’m motivated to do big decorations to beautify the world, bad storms are times when we need beauty.

They are officially not recommended in strong winds, or heavy rain or snow as per the manufacturers. However, in another post, I elaborate on precipitation and wind, and how to mitigate the concerns raised by the manufacturers. Ultimately, I do not believe these factors constitute the need to deflate during these weather events. I enjoy keeping Christmas inflatable decorations up to brighten storms and prevent decorations getting buried under the precipitation.

Are inflatables difficult to maintain?

The biggest pluses of inflatables are the ability to easily care for, set up, take down, and put them away. Cleaning consists of brushing off excess dirt and debris, wiping with a damp cloth to remove mud or other things. Setting up is the most complicated part as you have to stabilize it, which can take time, as explained here. Storage is simply pulling up stabilizing devices, wiping, air drying, rolling up, putting in a bin or original box.